How to make Lentil Dal 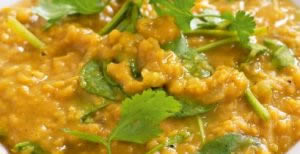 Lentils are generally used in soups and stews. Green and brown lentils hold their shape fairly well if not overcooked and can be added to salads and other dishes. The varieties that are soft after cooking are used mainly to thicken stews and soups or are made into purees.

French lentils are delicate peppery flavored lentils originating from Puy in France that are now grown in North America and Italy. They retain a firm texture after cooking, which makes them a good addition in salads and dishes where the whole bean is desired.

Red lentils cook up quickly but become soft and do not hold their shape well. They are best used to thicken a dish or in purees. They are most commonly used in Middle Eastern or Indian food dishes. Traditionally, the unhulled (skins on) red lentil, known as the brown massor, and the hulled (skin removed) red lentil, known as the massoor dal is most common for Indian dishes.